THE KRAFT FAMILY AWARDS $90,000 TO NONPROFITS DURING PREGAME CEREMONY ON SUNDAY, DEC. 29 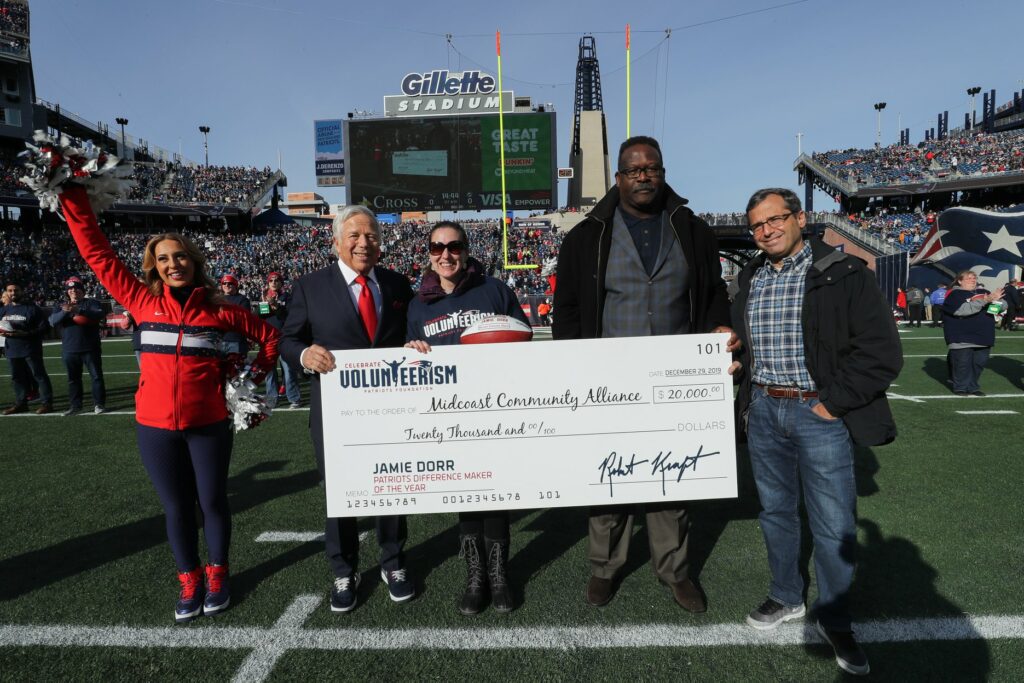 THE KRAFT FAMILY AWARDS $90,000 TO NONPROFITS DURING PREGAME CEREMONY ON SUNDAY, DEC. 29

The New England Patriots Foundation announced $90,000 in grants to 15 local nonprofits in honor of each Patriots Difference Maker named during the 2019 Celebrate Volunteerism initiative.

Jamie Dorr from the Midcoast Community Alliance named the Patriots Difference Maker of the Year and awarded a $20,000 grant for the nonprofit.

FOXBOROUGH, Mass.– Though the spirit of volunteerism will continue beyond the 2019 football season, the Kraft family and the New England Patriots Foundation celebrated the ongoing Celebrate Volunteerism initiative in a special pregame ceremony during the Patriots’ regular season finale versus the Miami Dolphins on Sunday, Dec. 29 at Gillette Stadium.

As part of their commitment to celebrating volunteers, the Foundation presented the “Patriots Difference Maker of the Week” award each week during the season, which aims to recognize deserving volunteers who go above and beyond to give back to their communities. Patriots Chairman and CEO Robert Kraft, Patriots Foundation president Josh Kraft and Patriots and Pro Football Hall of Famer Andre Tippett were on the field prior to the game to congratulate all of this year’s winners.

“Volunteerism is at the heart of giving back and bettering our communities,” said Robert Kraft. “These outstanding volunteers give so much of their time and energy to making the world a better place. We were honored to share their stories with our fans and to celebrate their dedication during our regular season finale. We hope their stories inspire more fans across the globe to get involved in their local communities.”

Jamie created the Midcoast Community Alliance in 2016 in response to several local teens dying by suicide. The nonprofit is a coalition committed to mental health awareness, advocating for those in need and expanding access to support. She leads representatives from more than 30 local organizations including the National Alliance on Mental Illness, the United Way, suicide survivors, faith organizations, local hospitals and police departments.

She has also created youth leadership programs and events, designed to offer academic and emotional support to local teens. She listens to students, understands their challenges, reduces the stigma surrounding mental health and ensures that students have the tools they need to succeed. Jamie has also been a volunteer for Big Brothers/Big Sisters for more than 10 years and in 2017, she was named Bath, Maine’s Citizen of the Year.

“I am very honored and excited to be selected as a Patriots Difference Maker, especially from an organization I admire greatly for its leadership and pursuit of excellence,” said Jamie. “Our youth are hurting and it’s up to every one of us to have difficult conversations about mental health and to take action to empower our youth to find healing. I have always been passionate about youth and found that volunteering with them gave as much to my life as it may have to theirs, and perhaps more.”

As part of the Celebrate Volunteerism initiative and the NFL’s Huddle for 100 initiative, current and former Patriots players made more than 500 appearances in New England communities throughout the year, participating in activities that included reading books to students, visiting patients in hospitals, giving back to children and families during the holidays and encouraging children to exercise for at least 60 minutes a day.

The Patriots Women’s Association, Patriots cheerleaders and Patriots season ticket members also volunteered their time throughout the year. They prepared meals for people experiencing homelessness, planted American flags to honor fallen heroes, created birthday packages for children in hospitals, and much more. Through the Huddle for 100 initiative, Patriots fans across the globe also volunteered more than 20 million minutes in their local communities.

The Kraft family and the Patriots Foundation will continue to Celebrate Volunteerism during the postseason, off-season and seasons to come. The Celebrate Volunteerism initiative aims to share examples of dedicated volunteers, build awareness of the need for volunteering, identify and educate others about volunteer opportunities and inspire New Englanders to follow the Kraft family’s example of becoming lifelong volunteers.

For more information about the Celebrate Volunteerism initiative and the NFL’s Huddle for 100 initiative, visit www.patriots.com/community.

2019 Patriots Difference Makers of the Week: 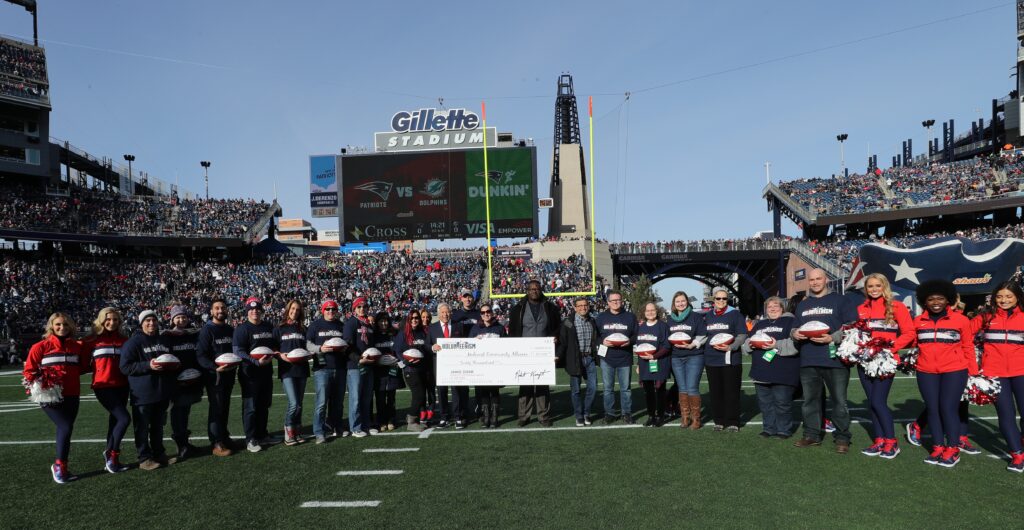