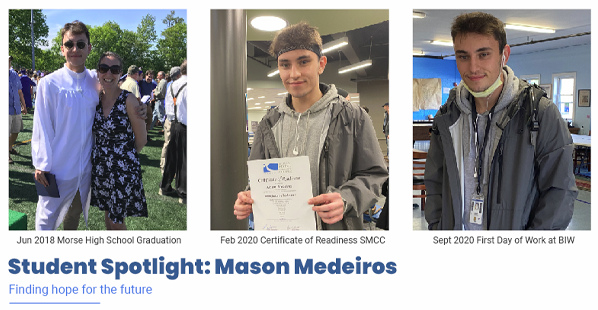 We met Mason when he was 16, as he walked around late one night, in the raw drizzle of a Maine spring, with no place to go. He had just gotten into a fist fight with a man who was living in his home at the time. With no family in the area, very limited resources and literally no place to sleep, MYC founder Jamie Dorr brought him to her family’s home for the night.

For the following year, as violence and substance misuse continued to invade his homelife, he bounced between his home and staying with friends. That’s when his guidance counselor at Morse High School introduced him to Donna Verhoeven, Youth Outreach Coordinator for Merrymeeting Homeless Youth Project.

For the last 6 months of his senior year, Mason found stability by working with Donna to receive mental health care, dental care, and Mainecare. He began staying regularly with the Dorr family and successfully graduated high school in June 2018.

After high school, Mason moved in with a family member who had recently moved to the area. He tried a handful of different jobs, working at a fast-food restaurant, dishwasher and maintenance worker, but was finding it hard to make ends meet.

In January 2020, MYC connected Mason with Southern Maine Community College and a paid Workforce Training position offered by Bath Iron Works. With no reliable transportation, MYC staff would pick him up each morning, feed him breakfast, hand him a packed lunch, and drop him off at the Brunswick Campus training.

There were many days he questioned his ability to complete the training successfully. He had doubts, because life had taught him that usually bad things happen. There were days he wanted to quit. Yet, weeks later, after sticking with it through those hard times, he proudly walked across the stage and received his Certificate of Readiness from a General Dynamics executive.

Then the pandemic hit. Then the strike. Mason moved to Connecticut to try and find work, not knowing what might happen next. Finally, in September, BIW called and Mason was hired. He was apprehensive, but excited, and could not wait to start!

On his first day, he stood inside the main yard, near the bottom of the iconic red and white crane, the one he has looked at from afar for so many years. “It’s so much bigger when you see it from that perspective,” he shared. “There are a lot of moving parts at the Yard and hundreds of people, each with their own job, yet all working toward the same goal. And now, I get to be a part of that.”

Of his support he says, “Without the support of Jamie, her husband, and Donna, there’s no way I could be in the position I’m in today, and there’s no way I would be going in the direction I’m headed.”

We know, however, that it was Mason’s determination for a life better than the one he was given that helped him develop his resilience and his perseverance when all he wanted to do was quit.